The 2014 edition of the Show and Conference from 18 to 21 March is about to start. Sabiana is ready to present important innovations. Here is a sneak preview. However we look forward to seein

Sabiana app. Always standing by people, Sabiana could not forego the development of an invaluable work tool for all its employees and associates: its App. This is the first innovation to be presented at the trade fair. Developed for Apple and Android, the Sabiana App has been developed to become the inseparable companion for professionals in the industry. Versatile, comprehensive, cheerful: come and test it at the Fair and it will win you over.

Atlas with electronic motor. Energy saving and variable air flow from 0 to 100%, here are the main features of the newborn in the large Air Heater family. Its name is Atlas ECM and it features an electronic motor controlled by a built-in inverter. As well as decrease electric consumption compared to traditional asynchronous motors, electronic motors make it possible to continuously vary the air flow rate and control the room temperature with higher precision, with added benefits on average sound levels.

Atlas ECM, produced in 6 sizes, already complies with the 2015 limits set forth by the new European regulations (EU) no. 327/2011 that sets especially low electrical consumption in relation to the air flow performance provided. The regulation has been in force since January 2013.

Water flow regulation valves. Sabiana introduces an interesting application on its fan coils, regarding a 2-way valve with control actuator and automatic water flow regulation, independent from the system’s upstream pressure. Featuring a compact size and simple manual setting of the desired flow rate (30 – 1300 l/hr), it represents a step forward towards simplification of climate control.

Flush installation kit for fan coils. We called it Moma, because exactly like the famous New York museum, it seeks to show off the beauty of modernity. This kit makes it possible to install fan coils flush with the wall, doing away with any encumbrance, including visual ones. As a matter of fact, Moma’s side may be painted in the same colour as the wall. This is a good talking point for putting forth fan coils as the ideal solution for residential premises as well.

Airknives. They are still called Meltemi but are all-Italian now. Sabiana presents the new airknives wholly manufactured in its premises. 3 applications (light commercial, commercial, industrial), 3 versions (ventilation only, water, electrical), 3 sizes (1000-1500-2000 mm) to offer the utmost versatility, with a comprehensive series of set-up and control systems. 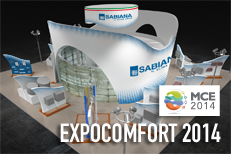